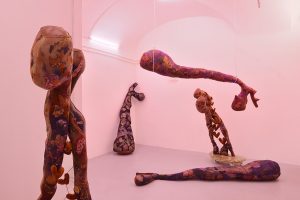 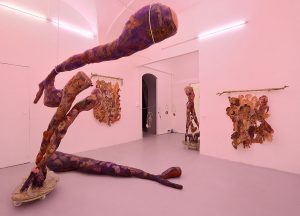 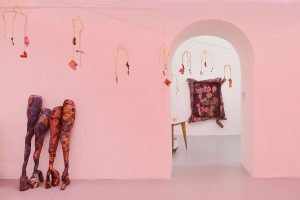 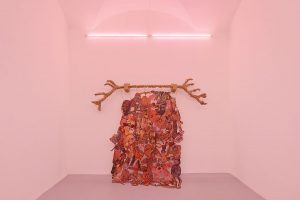 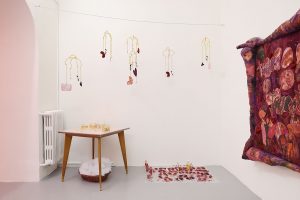 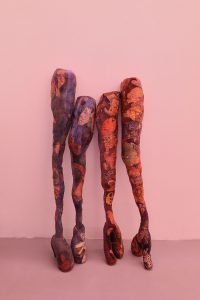 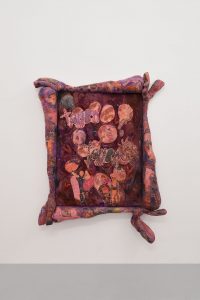 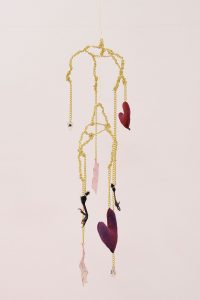 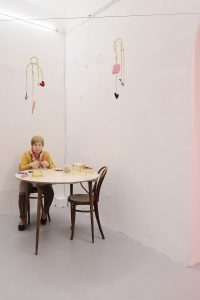 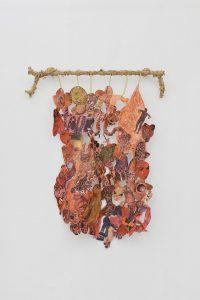 “Belladonna’s Muse” is a portrait or more likely even, a state of mind. Like a dreamscape that draws itself into a physical space, characters appear in forms of soft sculpture. The lively objects use as a point of departure personal experiences that belong to Athena Papadopoulos’ way of storytelling. Cut and paste images drawn from the artist’s archive are sewn together and laid over volumes of bulging materials. One gets the impression he or she is reading the artist’s diary, somewhere describing her life with an aggressively lyrical tenure while having accepted a somber state of dystopia. “Belladonna’s Muse“ suggests beautiful and elegant women who might convene, spend time together and inspire. The title is, however, an oxymoron: at once, it suggests a degree of adoration from one person to another, while at the same time belladonna is also a deadly nightshade plant used as a sedative; when consumed in large quantities, it is poisonous. The plant received its name via its homeopathic application by women in high society, many years ago, since the cherry extract, once swallowed, widens the pupils – a desirable effect for many. The exhibition at Basement Roma is entered through an intestinal pink tunnel, sickly sweet like the artificial taste of Pepto-Bismol: one is lead through different interpretations of the fictional and non (physically and mentally speaking), incorporating a series of gangrenous leg sculptures, an abstract portrait of the artist’s grandmother and objects ranging from disembodied yet sexy legs to amputated, putrid and supersaturated ones.

The space is a floater for disconnected limbs and thoughts. They are surrounded by a group of “Grapevine” pieces which like a wall of hunting trophies, or a kind of obsessive wall in a teenager’s bedroom, suggest a modern day shrine, or an analogue version of an FB feed. Images and materials that are amputated from their contexts, together drape the walls as overtanned, leathery skins, meticulously quilted together.

On one side of the exhibition space, new objects are being assembled by a group of elderly Italian women. A club of like-minded women who pretend to run a gift-shop create souvenirs, small mobiles that have a strange resemblance to an octopus, dancing in aspiration to be part of the festivities.

This setting of small workshop production interrupts the dreamy environment of the exhibition. It allows the viewer to revert back to a moment of creation which lays not in the past but in its instantaneous unfolding of. The audience finds itself among one or several women. These grandmothers, as in any Italian family, become Athena’s substitute of her own Greek family, grandmothers who stand for a matriarchy that represent a manifestation or quasi-portrait of the different life-stages where self-admiration turns into self-indulgence (versus self-despising moments of doubt and fear).

The hands and the sofa legs in this exhibition become a mirror of Papadopoulos’ own studio practice, an extension of her own hands, the hands of these belladonna women turn the showroom into a living room, a sewing circle, traditionally a setting not only for gossiping but an undercover for political conversations between women.
The artist’s oeuvre of painterly and sculptural works use as their point of departure autobiographical sources such as the debaucherous life of her diabetic family that she then exaggerates and transforms using literary, historical and pop cultural references that relate to her vision of her life as an artist living and working today in London.
Papadopoulos’ works are densely layered surfaces featuring imagery that are at once of a seductive and repulsive nature; they use photographic and hand-drawn elements, t-shirt transfers and textile elements and other materials to create collages that are made using performative gestures such as spitting medicines and wine, scratching, splashing and staining the surface with cosmetics and bleach. Papadopoulos creates environments that could be home to a dream-like, hedonistic cast of characters who are celebrating being alive every second but who cannot help but relish in the larger, darker and more complex meanings of life.