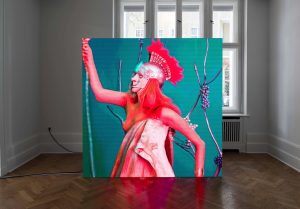 The Art Room is a format conceived by CURA. for Soho House Roma, consisting of bimonthly talks and video screenings aiming to highlight the work of some of the most interesting international artists. Mainly focusing on digital culture and moving images, The Art Room invites artists to present their recent productions and talk about the most urgent topics in their research. For this first edition, CURA. welcomes for the first time in Rome, Berlin-based multi-disciplinary artist Marianna Simnett. The artist presents a series of her most recent and celebrated video works introduced by a Q&A with curator Giulia Colletti.

Prayers for Roadkill, 2022
6 min 2 sec
Prayers for Roadkill draws its title from a line in Adrian Piper’s journal where she expresses empathy and fascination with the micro-violence that unfolds beneath the wheels of an automobile. In Simnett’s stop motion animation film and intricate sculptures depicting hybrid human-animal creatures, she wields the aesthetic of vintage children’s television programming, soft play areas, and modernist asylums to explore the emotional and material entanglements of love and cruelty. To create the characters in her film, Simnett not only literally reanimates roadkill but reclaims—and thereby empowers—the image of the animal to plumb the depths of some of the darkest, most fundamental aspects of being human.

The Severed Tail, 2022
20 min 30 sec
Drawing upon the mythic structures of fairy tales and fables, her new video installation The Severed Tail explores the tail as a lost link between animal and human—a reminder of our—animal selves—that is reclaimed in the film through extreme episodes of fetish and play. Simnett takes the commonly practiced, if partially outlawed, procedure of animal tail docking through frenetic visual and narrative subversions to open up questions about the conventions of species, gender, and our relationship to others. The Severed Tail shifts between human and non-human actors to tell the story of a piglet’s radical journey through different layers of fetish worlds. The metamorphic and ultimately cathartic nature of this odyssey is amplified through the work’s spatial dimensions—the constantly shifting focal point of three asynchronous screens mirrors its protagonist’s sense of bewilderment and wonder, while a plush sculptural seating element—an outsized tail that snakes through the exhibition space—gestures towards what has been lost. A tale of transformation and desire, The Severed Tail delves into the slippages between species—and their mutual transformations—arguing for hybridity as a foundational state of being.
The project emerged from a deeply collaborative process between different creative practitioners. To create the work, Simnett immersed herself in the Pup Play and LARP communities in Berlin. The Severed Tail is shot by the award-winning cinematographer Robbie Ryan (The Favorite, American Honey), performed and choreographed by Kiani Del Valle, and its soundtrack composed by the American artist, composer, and choreographer Colin Self.

Blue Moon, 2022
5 min
In Marianna Simnett’s video Blue Moon, we see a lithe figure whose limbs begin to dissolve to the melodies of a haunting woodwind soundtrack. The video is part of a recent series of Simnett’s works whose point of departure is the myth of Athena crafting the first flute. Legend goes that after being brutally mocked for the contortions her face made while playing the flute, Athena discarded the instrument in horror. To create Blue Moon, the artist generated hours of footage in which she stages fantastical interpretations of Athena. These data sets were then fed into a custom AI model, which reimagined Simnett’s multiple guises of Athena as a dynamic, mercurial figure in constant motion. In Blue Moon, Simnett’s dramatically puffed out multicoloured cheeks and melting form reclaim Athena’s horror at her transfigured face, revelling in the mutual transformation that occurs through our psychologically charged attachment to the objects we possess.